Who would have thought!? 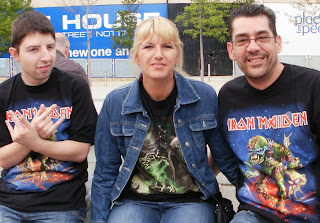 Last night Steve, Dan and I went to see Iron Maiden in Nottingham at the arena. Steve and Dan are avid fans and I like most  of the music and rather fancy Bruce Dickinson! Win, win and win situation! :)
Dan has been waiting 8 months since we got the tickets and the only other gig he has been to was Status Quo.
We got to Nottingham, wondered around a bit, had coffee and then something to eat and headed to find the nearest pub to the arena. We couldn't miss it, it had been taken over by the Iron Maiden fan club and there were rockers of all shapes sizes and abilities in Maiden t-shirts everywhere! The atmosphere was great and Dan said he felt really comfortable in that crowded environment with masses of rockers of all descriptions. Hmm... an autistic person comfortable in a crowd!! Then we headed for the venue and he had every imaginable sensory experience thrown at him. Crowds, LOUD noise, extremely bright flashing lights all of which would have caused a complete on the floor, eyes shut and hands over ears meltdown!! How far we have come!!! 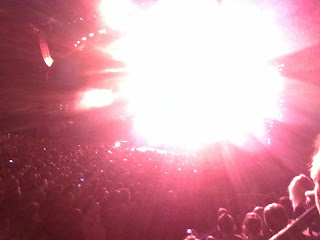 I believe that continually exposing him to "uncomfortable" situations and having to deal with the melt downs as they have happened has resulted in him now being able to cope. He also understands himself really well and that showed when I asked him a couple of hours before the show if he was excited. His response was that he was "keeping himself calm and not allowing himself to get excited until the show starts." He said he sort of switches off if he feels himself starting to overreact. That sometimes gives others the impression that he doesn't care when he actually does but is trying to keep a handle on himself.
Thinking back I exposed him to small family get togethers, then sports such as bowling and little league football, then the circus, then larger football events and eventually large venue events. It is great that he now is comfortable participating and is able to go and attend events of his musical or football heroes and participate.
His face when his favourite band came on the stage was a picture and so rewarding!! A great night was had by all! :):)